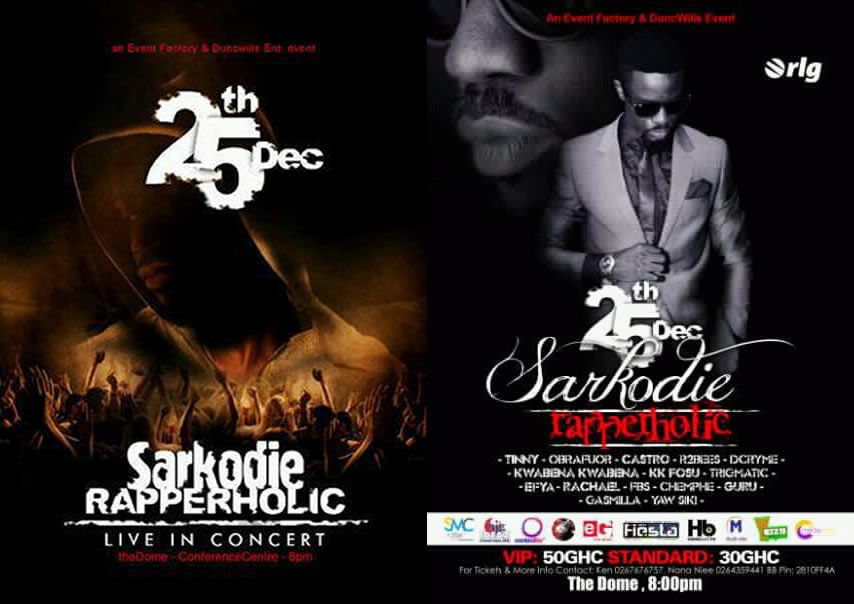 A wonderful Way to end the Year Sarkodie Live in Concert  December 25 at the Dome of the Accra Conference Centre . Featuring Artists like Tinny ,Efya,Guru,Yaw Ski ,Rachael,Obiafour ,Castro,R2bees,DCryme, Kwabena Kwabena ,Trigmatic and Many More..

All road leads to the Dome of the Accra Conference Centre this December 25th where Sarkodie is Going to give you the best christmas gift EVER.

Five singles released from the ‘Rapperholic’ album ‘Good Bye’, ‘One Time For Your Mind’, ‘You Go Kill Me’, ‘Living Legend’ and ‘Onyame Nhyira’ featured Muggees of R2Bees, EL, Kesse and Castro are getting rotation on both radio and television.

The ‘Sarkodie Rapperholic – Live In Concert’ is powered by Event Factory & Duncwills Entertainment.

VIDEO: Watch Sarkodie Freestyle At The Grammy Museum In LA