With his back to backs hit with songs like Orente, Pick up, and Sade, YBNL act, Adekunle Gold, is indeed a favorite among Nigerians and not just the young and young at hearts, but even the elderly seem to love his music.

The talented singer, was recently interviewed by Femi of Hip Tv while on the street and was surprised at the unexpected fan he met.

According to the singer who later shared the news on social media, an elderly woman, upon sighting him crossed over to the other side of the road where he was being interviewed, hugged and prayed fir him, a gesture Adekunle Gold was so grateful for.

Mama Crossed from the other side of the road to greet and pray for me during the interview with Femi on the street! Too much love. 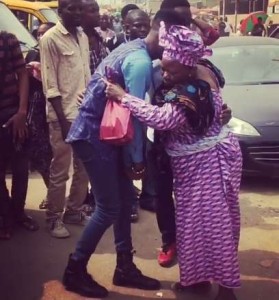 How sweet. Keep on with the good works Bro!