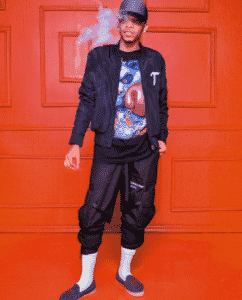 Singer, Waconzy is under fire for the comment he made on a picture shared by Tekno.

Tekno shared a picture of himself smoking up while on set and captioned it with, “We needed more smoke on set!????.”

The comment led a mass of Tekno followers to attack the I Celebrate singer. In one of the comments, Waconzy was told to shut up his mouth and he was referred to as “one hit wonder.” Another Tekno follower told Waconzy that his career is irrelevant.

Waconzy under fire over his stance on cannabis

The intense backlash forced Waconzy to make a post to explain himself. The singer dropped another comment in the same post made by Tekno, explaining that he was not referring to Tekno with his comment. He wrote; “finally I wasn’t referring to tekno but to my young youths who believe the only way they will get inspiration is by smoking weed . Am here to tell them that to make evergreen success , u must THINK CLEARLY and must be UNDER NO INFLUENCE. Protect ur mind .. it’s all u have ! Gone in ur mind , gone forever ????”

“”Shut Up Your Mouth One Hit Wonder” – Waconzy Under Fire For “Attacking” Tekno”, 5 out of 5 based on 1 ratings.