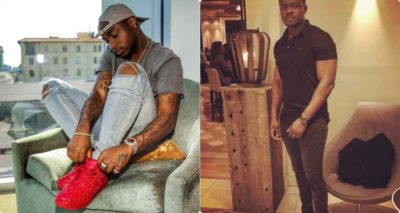 Singer Davido will be thanking his stars after escaping what might have been an assassination attempt on his life last. According to reports, Davido and his crew member were attacked by a London-based Nigerian socialite who goes by the handle ‘mrchrisonline‘ on Instagram.

The said socialite allegedly attacked David and his crew member at a club last night. According to the story shared online, Davido escaped after exiting through the back door.

Mr Chris later came online to brag about the incident and further warned the singer to watch his back whenever he is in London.

As at the time of this report the singer is yet to respond or comment on the incident.

@davidoofficial u fool. No one knows u here boy. U better act humble next time u around here u .U had to be sneaked out God saved u didnt come out thru front door. Am telling u watch ur back. Big massive massive shout out to my boy @kendallkn and @remii_renzel_ for the response. One phone call and I had about 30men waiting outside. @davidoofficial am not #wizkid dont fuck with wrong guy u fool. And u better keep running ur been watched. #FakeAss Davido #LittleCunt

“‘You Won’t Be Lucky Next Time’ – Man Threatens Davido After Beating His Crew Members”, 5 out of 5 based on 1 ratings.