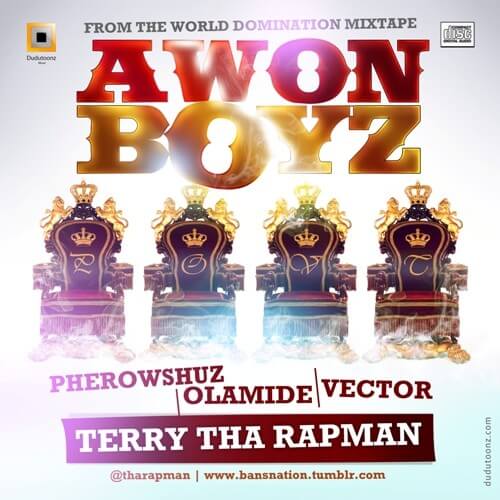 This is probably going to be the biggest rap collabo of 2012. Terry Tha Rapman, a seasoned veteran in the Nigerian rap game features some of the hottest MCs around for the latest single off his upcoming mixtape World Domination. Awon Boyz features Pherowshuz (who he worked with on the award winning Sample), Olamide (#YBNL), the current poster boy of Nigerian rap and Vector who many have picked to emerge as the hottest rapper of 2012.

Awon Boyz was produced by Pherowshuz and it feature samples from Olu Maintain, Eedris Abdulkareem and 50 Cent. On this song the four MCs spit some very hot bars and clearly show they have what it takes to sit on Nigeria’s rap throne. Awon Boyz is the last single to drop from Terry’s mixtape. World Domination drops on 18-04-2012.