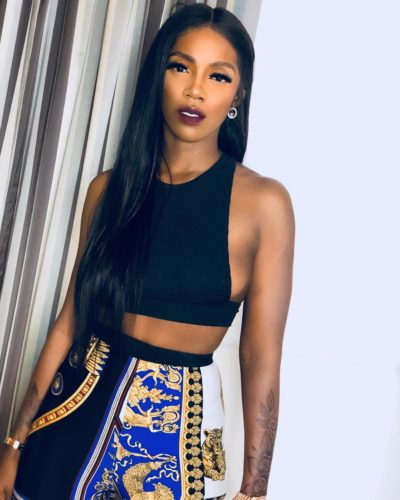 Tiwa Savage has reacted to the allegations that she threw shots at Wizkid on the cover she did to Kizz Daniel‘s trending song; “Fvck You” which stormed the internet yesterday.

Following the declaration by Kizz Daniel some days ago that the female singers in the music industry should follow the train by joining the challenge to his latest single, “Fvck You,” which has been done only by the male singers in the industry, Mama Jam Jam decided to stun the industry as she became the first female singer to jump on the challenge when she dropped her own cover yesterday.

After the release of her own challenge of the song, rumours circulated social media that she is dissing Wizkid on the song due to the lyrics and how it fits in perfectly with the relationship between she and Starboy.

However after the rumours stormed social media, Tiwa, has come out to clear the air through her Twitter page, saying she isn’t dissing anyone on the song and that it’s just a challenge like the other guys have been doing. “Other male artists don do their own challenge but na my own be sub? … IT IS NOT BEAUTIFUL PEOPLE, just a challenge  I hate no one and would never disrespect anyone like that. NEVER,” she wrote. 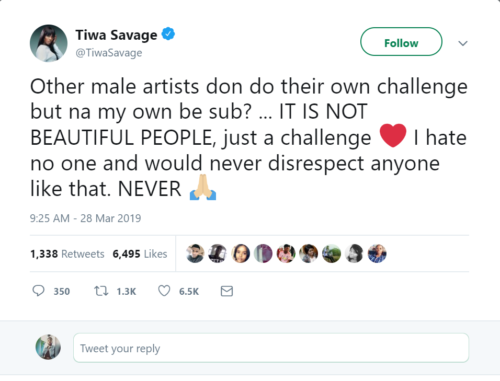 Bridget is a graduate of Irgib Africa University Republic of Benin, optimistic in becoming successful,a significant lover of God ,a lady of integrity ,cool and yet adverse .loves listening to music and touring. And yes very stylish and also a good listener / adviser.
Submit your comment
1 comment on this postSubmit yours