Tiwa Savage ft. Omarion’s “Get It Now” vs Yemi Alade ft. Rick Ross’ “Oh My Gosh”… Which Is Better? 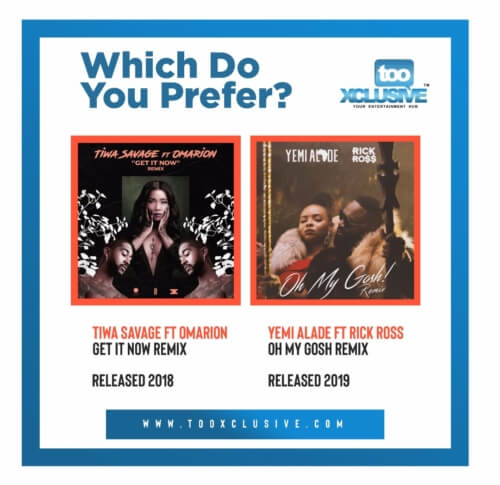 It can be boldly said that Tiwa Savage and Yemi Alade are amongst the top artistes we have in Nigeria and Africa at large.

Both women have gained so much recognition worldwide from winning awards to mind-blowing performances you name it. They have also collaborated with artistes locally and internationally to dish out massive hits.

Tiwa Savage also known as the African Bad Girl and American singer, Omarion released the remix to the song “Get It Now” in 2018.

Yemi Alade fondly called Mama Africa teamed up with American rapper, Rick Ross for the remix of “Oh My God” which was released a few weeks ago.

However, both songs are making waves and it is difficult to choose which is a better Remix. This brings us to ask Yemi Alade’s & Rick Ross’ “Oh My Gosh” and Tiwa Savage & Omarion’s “Get It Now”… Which Do You Prefer?

Olaosebikan Olabimpe is a News Writer and Content Creator at Tooxclusive. Her idea of a great day is to be indoors snuggled up with a book and good music. She is also a passionate lover of rap.
Website
Submit your comment
16 total pingbacks on this post
Popular Posts