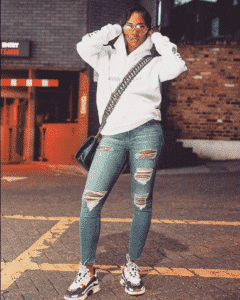 Tiwa Savage has revealed to the public that her song Tiwa’s Vibe has been banned on local stations. The singer shared the news on her Instagram page.

In the early hours of the day (June 9th, 2018), Tiwa Savage broke the news of the ban via Instastory posts. The Mavin Records First Lady claimed the song was banned because she mentioned ‘shayo,’ which means alcohol, on the song which she released sometime in May, 2018.

Tiwa Savage expressed her disappointment at the ban with a teary smiley. In another post, she questioned the logic behind the ban. The post read, “but alcohol is legal right?”

Tiwa’s question is one that has become a necessity considering the rate at which music materials are getting banned in the country, especially in recent times, for debatable reasons. It is expected that the authority that decides which material is fit for broadcast in the country would come out to make a statement on the ban, like it did in the past.

Tiwa Savage reacts after her song was banned for mentioning “alcohol.”