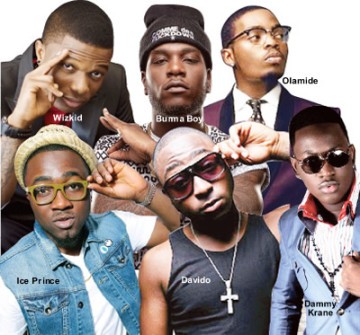 A new generation of artistes are rocking the entertainment scene and smiling to the bank, JAYNE AUGOYE reports

A wind of change is currently blowing across the music industry in Nigeria. A new order championed by young, vibrant and talented artistes has emerged. Rather than curse the day that their children decided to embrace a career in music instead of education, the parents of these wave-making artistes are pleased with the success they have achieved.

Today, the young artistes are giving the older and established stars a run for their money. These new-wave superstars now rub shoulders with the same artistes whom they once looked up to or chose as role models.

Apart from competing with the ‘old guards’ in terms of income and expenditure, they are often nominated for major music awards in similar categories.

Multinationals and telecommunications outfits, as well as other major events sponsors, have realised that the younger generation of music artistes represent the future of entertainment in Nigeria. With a good number of them aged between 20 and 25 years and a few others barely clocking 30, the sky seems to be the limit.

Many of the emerging stars are not just rich; they flaunt their wealth at every given opportunity. It seems that the rewards for their modest efforts at making many Nigerians happy are without limit and they always come in the form of luxury mansions, sold-out concerts, huge fan base, state-of-the-art cars, bestselling albums, multi-million naira endorsement deals, chattered flights, big budget videos, custom-made outfits, ‘bling bling’ and generous airplay on terrestrial TV stations.

Usually dressed in sagging pairs of trousers with expensive jewellery around their necks, many of them charge as much as N1.5m to mime to their songs for only 10 minutes at wedding parties or concerts. Many of them had to drop out of school to pursue a career in music.

At 23, Ayodeji Ibrahim Balogun, a.k.a Wizkid, leads the pack. A string of endorsement deals, including one from MTN, has placed him on the list of big earning music artistes in Nigeria. At present, he is the highest paid Pepsi Ambassador in Africa and he lives in a N140m choice home in Lekki, Lagos.

The talented singer, songwriter and performer has emerged one of Nigeria’s hottest music acts, seven years after he broke into the Nigerian music scene. The last child in a family of six, Wizkid began to sing at the age of 11. Like new wine, his performance matured with age. His talent has taken him to different parts of the world and seen him perform alongside world class artistes, such as Chris Brown, Akon, and Young Jeezy, and Kardinal Official.

The young man’s fortunes improved in 2012, a few months after he released his Superstar album. As expected, his rating soared in the same year and he was named the second most influential Nigerian artiste on Twitter, an enviable position which clearly reflected his growing popularity.

Wizkid’s position on the African music chart was further justified after he made it to the Channel O/Forbes List of Bankable African Artistes. Mentioned alongside big weights like Don Jazzy, Psquare, D’banj, he was placed ahead of Tuface Idibia, on the list. Early in the year, he threw a free appreciation party for his fans at the New African Shrine.  He has the BET, MTV, Channel O, Ghana Music Awards to his credit.

Olamide Adedeji, aka Badoo, has succeeded in filling the vacuum created by the death of rap sensation, Dagrin. The alternative rapper, who has redefined the word Razz as the new cool, has been dubbed the ‘king of the streets. He recently signed a multimillion naira endorsement deal with the makers of  Ciroc Ultra Premium vodka.

For the self acclaimed ‘Voice of the Street’, who grew up in the Bariga area of Lagos, fame did not come cheap.  He fell in love with rap music at a tender age and was always visiting renowned producer ID Cabasa’s music studio in his school uniform.

Today, Olamide hobnobs with some of the industry big names, especially D’banj. Pictures of both artistes surfaced online and their close relationship gave room to speculation that he had been signed on to the seld-styled Koko Master’s record label.

Today, the 24-year-old star acquired a brand new 2013 Range Rover Sport. He also topped the winners list at the 2013 Nigerian Entertainments Awards in New York, US, with three awards.

Twenty-six-year-old Ice Prince lives like a true superstar. A proud owner of a 2010 model of Bentley GT, a Range Rover SUV, among many others, the Chocolate City Records ‘golden boy’ is also a BET Awards winner. Since his first single ‘Oleku’ was released, he has witnessed a meteoric rise to the top.

He gained international recognition after beating 2face Idibia to the Best International Act Award at the BET Awards. He recently relocated from his apartment in Palm Groove Estate, Lagos to a bigger apartment in the Ogudu area, after completing a mansion in his hometown, Jos. The buzz around him got louder after he appeared in Yvonne Nelson’s ‘House of Gold’ alongside Ghanaian actor, Majid Michael.

At 19, this 2face Idibia protégé is the youngest of the pack. He hit the limelight after signing on 2face’s Hypertek Records in 2012. He started singing when he was eight years-old in the toddlers’ choir in church. By the time he clocked 11, he was already a back-up singer for other artistes. His mum, who is currently based in the US, manages a number of Fuji artistes.

Long before he put out an official single, music video, or inked a record deal, he had over 4,000 followers on twitter. With his hit singles, My Dear and Ligali, the artiste known for his melodic voice, engaging lyrics and exciting genre of alternative music has collaborated with the biggest names in the industry.

Burna Boy made newspaper headlines after reports emerged that he sold the marketing rights to his debut album, ‘Leaving an impact for eternity’ for N10m to popular Alaba music and movie marketer, Uba Pacific.

The album is also said to have made a record sale of 40,000 units on the day of its release.

The singer has the backing of his grandfather, Benson Idonije, who was the manager of the late Afrobeat legend, Fela Kuti.

Burna Boy officially broke into the music industry in December 2010 when he moved back to Nigeria from London and has remained a household name in Port-Harcourt. But, it wasn’t until June, 2012, when he made a cross-over to the Lagos music scene with his mid-tempo Summer Jam, Like to Party. He is a Globacom Ambassador.

At 20, David Adeleke, popularly known as Davido, is one of the most popular young artistes in Nigeria.  The singer drew the attention of millions of music fans when he introduced himself as Omo baba olowo in his hit song titled Dami duro. Translated from Yoruba to English language, it means ‘son of a rich man’.

Davido, whose father, Dr. Deji Adeleke, is the chairman of Keplo-Pacific Energy Pacific, a company that is involved in banking, steel, power and energy, found his way to the top as if with the snap of a finger.

The youngster, who is not afraid to boast about his father’s wealth, always causes a stir on Twitter with his controversial tweets.

So far, he has won some international awards and performed at various shows within and outside the country. He is also the face of MTN Pulse.

Davido’s personal collection of exotic cars comprise a silver 2012 Honda Accord, a 2012 Hyundai Sonata, which he won for being ‘Next Rated’ at the 2012 Headies, a N12m 2012 Audi Q7, N17m Chevrolet Camaro and a N21m Mercedes Benz G55 AMG, his fifth car since he shot to fame last year.

Surfing through the net today i came across this article written by the Entertainment section of the PUNCH newspaper , 5 Young Artistes cashing out BIG time now in the industry ( well i think Dammy Krane on this list is a mistake #justsaying.