Trey Songz Joins Davido On Stage In The Los Angeles, US To Perform “Fall” || Watch Video 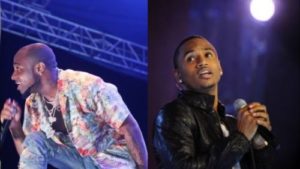 Davido’s influence in the United States is getting bigger as each day passes as some of the biggest stars in the country want to associate with him one way or the other.

The Nigerian superstar’s bromance with Chris Brown is not anything that is hidden to music followers as both singers have been around each other since “Blow My Mind” dropped, performing together on stage twice at the Indigo Tour and proposing to drop a joint album soon.

However, another pleasant surprise happened yesterday in the United States while Davido was performing at a show he hosted in Los Angeles yesterday. During the course of the singer’s performance, Trey Songz got on stage and told the DJ to stop the music as he wants to join Davido in the performance. On seeing this, the watching crowd shouted for joy as they realized they were about to be hit with an amusing experience.

“Davido And I Will Be Going…” – Wizkid Makes Shocking Announcement