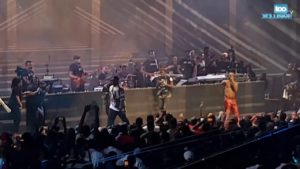 After Burna Boy’s surprise invasion of Wande Coal’s concert a couple of weeks back, Wande decided also the popular creed that says “One good turn deserves another” as he returns the favour by making an appearance at Burna Boy’s concert “Burna Live” in Lagos at the Eko Conventional Centre on Wednesday night.

Burna Boy who had a number of his friends on stand-by to deliver their performance to the ‘thirsty’ crowd called out Wande Coal in the middle of his performance and the crowd went wild.

Wande surely delivers with his unique voice as the crowd were totally mesmerised while he performed.

“Wande Coal Returns Favour As He Set Burna Boy’s Lagos Concert On ‘Fire’ || Watch Video”, 5 out of 5 based on 1 ratings.