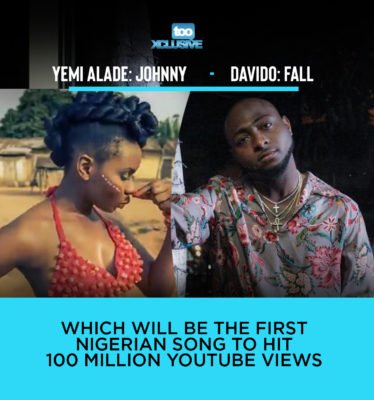 Amassing an enormous number of views on YouTube for Nigerian music videos for a long period of time was really a “heavy duty” and this could probably have been as a result of the ‘restriction’ of the access to internet service. It is only through the internet you can be able to access YouTube for videos, not only musical but any kind of video and not having an access to it would definitely limit the number of views the videos get like it was the case for Nigerian music videos in the past.

But it is great news that the views for our music videos on YouTube have rapidly improved in recent time as there have been constant breaking and setting of records for views for our music videos by our Nigerian artistes, thanks to a wider access to sophisticated mobile devices and decent internet services. The likes of Yemi Alade’s “Johnny’, PSquare’s “Personally”, Sinach’s “Way Maker”, Davido’s “Fall”, Tekno’s “Pana”, Runtown’s “Mad Over You”, Wizkid’s “Come Closer” ft Drake have all garnered spectacular number of views judging by the Nigerian realm for YouTube views.

“Johnny” a smash hit single by songstress; Yemi Alade was released as a video on YouTube on the 3rd of March, 2014, and has since gained over 96 million views; putting it at the summit of the list of most watched Nigerian music video on the digital platform.

Davido uploaded “African anthem”; “Fall” on YouTube on the 2nd of June, 2017 which has since gained 92 million views making it the second most watched Nigerian music video on YouTube.

But “Fall” has gained 92 million views just within a year compared to “Johnny” which has 96 million views in four years. Does this in turn means that “Fall” will have a 100 million views before “Johnny”?

Which do you think will get the first 100 million views on YouTube? Drop your comments in the comment section below.