After Listening To Beyonce’s “The Gift Album,” Which African Artiste Impressed The Most? 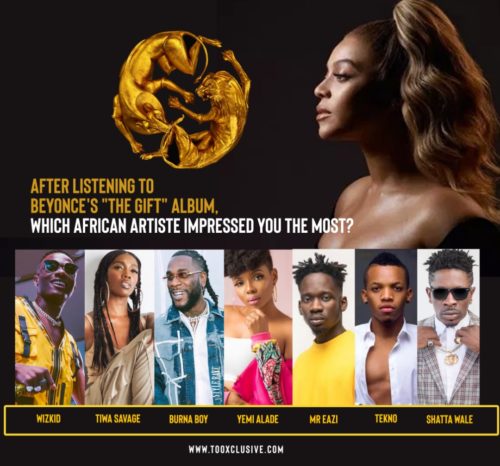 Wizkid features alongside, queen Bey on “Brown Skin Girl” which has been widely acclaimed by many to be the best song on the album, Burna Boy had a track all to himself as he injects some real African vibes on the project with his track 8 effort, “Ja Ara E” which seems to be the best jam on the album to some other music fans too.

Also on the music project are Tekno, Yemi Alade & Mr Eazi who pulled resources together to deliver on track 6, titled “Don’t Jealous Me,” Beyonce features South-Africans, Busiswa, Moonchild Sanelly alongside Yemi Alade who is featuring for the second time on track 23, “My Power” while she has also Ghanaian artiste, Shatta Wale on track 19 with “Already.” The final track that has the efforts of African artistes is the high-life inspired track 17, “Keys To The Kingdom” which really is a sweet tune.

However, as we all know, one thing that is inevitable about African music is the comparison of artistes to artistes, songs to songs and all other things comparable, and this has caused music fans to compare the efforts of all the African acts on the new Beyonce album.

In this light, we have decided also to take part in the comparison which has made us prepare a question below which looks in the direction of the African artiste that did best on the album.

After listening to Beyonce’s “The Gift Album,” which African artiste impressed the most?

“After Listening To Beyonce’s “The Gift Album,” Which African Artiste Impressed The Most?”, 3 out of 5 based on 25 ratings.

Nifemi is a graduate of the University of Lagos. He's a unique user of the pen when it comes to the expression of whatever. He is editor-in-chief of the organization and also a writer of news, articles, editorials and a lot more to help expand the level of knowledge of the readers and simultaneously have them entertained. A lover of music and football is who he is and a Man Utd die-hard.
Submit your comment
42 total comments on this postSubmit yours
Popular Posts