‘Baby Kingsways’ vs ‘Koma Jensun’ vs ‘Caro’… Which Of These New Marlian Songs Are You Feeling The Most? 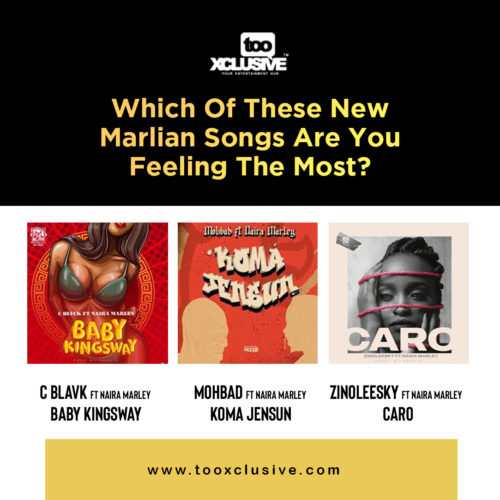 C Blvck was the first artiste to release his own debut single titled “Baby Kingsway“, followed by Mohbad with “Koma Jensun” and lastly Zinoleesky with “Caro“. The trio all featured Naira Marley on their prospective singles.

Each song has been making serious wave since its release. Nigerian pop star, Davido can’t get over the ‘Baby Kingsway‘ vibe, the song is always playing most time background on his IG stories. Mohbad’s ‘Koma Jensun‘ is the latest anthem on the street cuz of its catchy lyrics and Zinoleesky’s ‘Caro‘ is now coming as fans favourite.

The year as just started and these new Marlians (Naira Marley’s signee) are raleady all over the place. All their songs are bursting playlist and everywhere which makes it quite difficult for one pick a favourite. This has brought us to ask you the music fans, major consumers of these songs… Between C Blvck’s “Baby kingsway“, Mohbad’s “Koma Jensun” and Zinoleesky’s ‘Caro‘, Which Song Are You Feeling The Most (Your Favourite)?