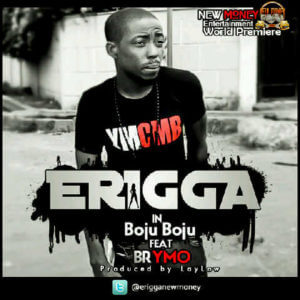 He started out with the dream of becoming a professional basket ball player having played Delta State Basketball Team and also in the Milo Basketball Championship for secondary schools.
This 23 year old pidgin rap sensation from Warri in Delta State called Erhiga Agarivbie but better known as Erigga Newmoney started recording songs at the tender been inspired by rap icons like rakim, canibus ,50 cent, Jay Z, Eminem, Jarule and Nas.

He teamed up with Choc Boi ‘Brymo’ of Chocolate City Records to Drop another Official Single Off His Album Coming Soon. He has also won several music awards in warri delta state and Benin .he has performed at great shows and events across the country with total viewing capacity of 7000 viewers such as : the green white green carnival, guinness Brand production promo shows, sky bank campus card tour and Kennis music easter fiesta One really needs to listen to his singles to grasp the fact that this cat is going to cause a major stir-up in the rap industry in Nigeria Africa and the world When commenting of his plans for the future, he says his plan is to make many Nigerian top rappers find it hard to feed their families. A challenge he set for himself to accomplish come 2012.

He is currently under the signage of Heavy Weight Emergence record label NEW MONEY ENTERTAINMENT own by SNOW MAN. You can follow him on twitter to get familiar with him @erigganewmoney and facebook FACEBOOK.COM/erigganewmoney