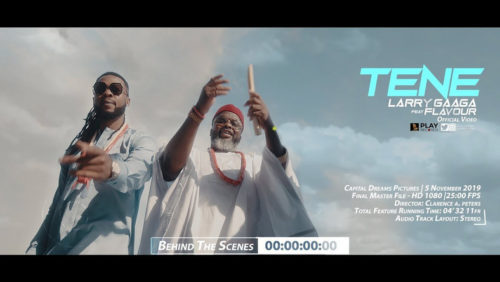 Music boss, Larry Gaaga and singer, Flavour have won the award for the Best Soundtrack Award at the 2020 AMVCA held in Lagos.

The two bagged the award at the seventh edition of the African Magic Viewers’ Choice Awards which was held at the Eko Hotels and Suites, Victoria Island, Lagos. Larry and Flavour won the Best Soundtrack Award for their song, ‘Tene’ which was released as part of the original soundtrack for legacy Nollywood production, Living In Bondage: Breaking Free. The award was accepted on behalf of both artists by Media personality. Ebuka Obi-Uchendu.

The songs on the official soundtrack album include ‘Finish Me’ featuring 2Baba, Waje, Omawumi, and Peruzzi; ‘In my Head’ featuring Patoranking, ‘Follow me’ featuring Syemca and ‘Trust Nobody’ featuring Skales and Yung L.