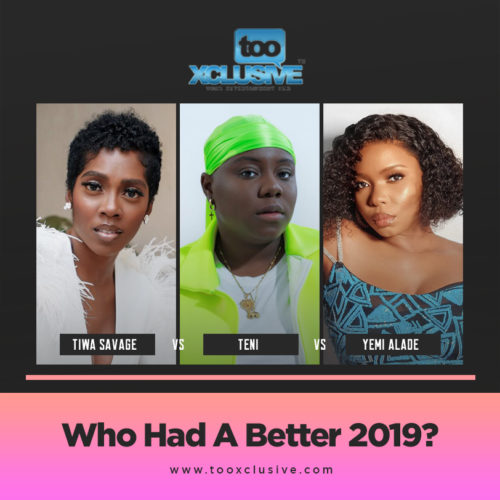 2019 saw a lot of female artistes shine like never before in the music industry. This article, however, is centered on three women who have changed how female artistes are seen in the music industry. These females stepped up their game and have proved that women can do so much more by achieving the unbelievable. We have complied with their achievements in the past year to know who truly made the highest waves.

Tiwatope Savage, known professionally as Tiwa Savage, started the year with the announcement of her exit from Mavin after seven years at the record label. Mama Jam Jam as she is fondly called signed a deal with Universal Music Group and released her first single, “49-99,” in September. The single which pays homage to legendary afrobeats king, Fela Kuti who happens to be her mentor, references a transit bus with only 49 seats, but 99 standing passengers.

The song’s title also derives from Kuti’s 1978 “Shuffering and Shmiling” record and speaks to the terrible economic Nigeria faces as a country. Its pulse throbbing visuals which was directed by Meji Alabi did a wonderful job in portraying the song’s message and has amassed over 8 million views since its release. Tiwa also blessed fans with singles like “Attention” and “Owo Mi Da” which was released on the same day.

The singer was also a standout talent at London’s Wireless Festival and was one of the golden voices on “Keys to the Kingdom” alongside Mr Eazi off Beyoncé’s The Lion King: The Gift album. The track was picked as one of the best songs on the album as she was able to show she has what it takes to be an international artiste.  Tiwa savage also collaborated with several top acts like American rapper, Saweetie, Wale & French Montana on the remix of the hit song “My Type” and other Nigerian acts like Zlatan, Kizz Daniel, and Wizkid.

Sensational singer, Teniola Apata professionally known as Teni didn’t stop making hits in 2018 but carried it all the way to 2019. Although she started the year with “Sugar Mummy” which was dubbed the wackest song of her career, Teni stood strong and proceed that she’s still a force to reckon with by releasing her second single “Power Ranger” which did better. Teni collaborated with literally everyone in the Nigerian music scene and these songs earned her multiple prominent nominations like BET  ‘Best New International Act’ and MTV Europe ‘Best African Act’. However, she lost the awards to Burna Boy but that did not stop her from winning other big awards in Nigeria.

Teni ended the year with one of the biggest songs of 2019 -“Billionaire“. This track within a short period hit the speakers and became an anthem not just among the elite but also on the streets. She later released her EP “Billionaire” which amassed loads streams on all digital platforms. The singer also blessed fans with her Billionaire concert which was one of the best shows music fans had ever seen. The show took place on a Monday(which is a usual day to hold such event in Lagos) had fans leave their various places of work at the end of business just to see the singer .

Yemi Eberechi Alade, simply known as Yemi Alade made headlines with the release of her 4th studio album “Woman of Steel” which garnered over 100 million streams on all digital platforms few months after its release. She broke yet another YouTube record in July, becoming the first African woman artist to amass a million subscribers and still counting on the video site.

Yemi collaborated with notable artistes like Rick Ross on (‘Oh My Gosh Remix‘), Angélique Kidjo shooting her name into the international scene. The singer was also featured on “Don’t Jealous Me” alongside Tekno, Mr Eazi and Lord Afrixana and “My Power” on Beyoncé’s love letter to Africa, “The Gift”. She also sold-out shows in different parts of Africa and also out of the continent making her the most toured Nigerian female artiste. Just like her colleague, Tiwa she also signed a deal with Universal Music Group to wrap up things up for the year.

Do let us know in the comment section below

Olaosebikan Olabimpe is a News Writer and Content Creator at Tooxclusive. Her idea of a great day is to be indoors snuggled up with a book and good music. She is also a passionate lover of rap.
Website
Submit your comment
39 total comments on this postSubmit yours
VIDEO OF THE WEEK
Popular Posts