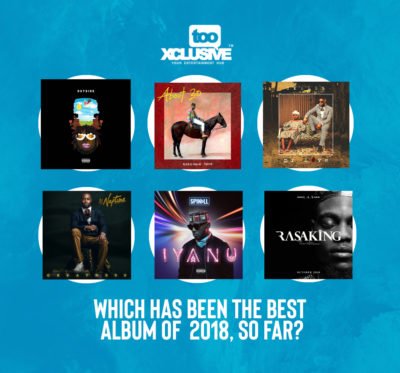 2018 so far in the Nigerian music industry has been a year of the albums, lots of music albums have been dropped by the acts within the industry including the DJs which have gained fair, decent or awesome reception from buyers and listeners.

We have decided to scrutinize the albums already dropped and shortlist what we feel are the best 6 so far in order to have you select which has been the best so far. Brief insights about the albums are shared below:

On the 26th of January, 2018; Burna Boy announced the release of his 3rd studio album after L.I.F.E (Leaving An Impact For Eternity) in 2013 and On A Spaceship in 2015. The album up till date has made a large number of people identify and believe more in the mastery in the craft of the Dancehall, R&B and Afrobeats star with hits and catchy tunes from the album.

The album is a 13-track body of work and it has pushed Burna to joining other superstars at the summit of Nigerian and African music.

This is Adekunle Gold’s second album after after “Gold.” This is a 16-track album that consists of beautiful songs such as “Ire,” “Somebody,” “Damn Delilah,” “Money,” etc

“About 30″” was released on the  25th of May, 2018 and it contained very inspiring lyrics and pleasant sounds. it has been the favourite of many music fans in 2018 so far.

Baseline Records front-runner, Skales on the 19th of July, 2018 declared the release of his 3rd studio album; “Mr Love” after the release of “Man of The Year” in 2015 and “The Never Say Never Guy” in 2017. Skales widely known for his resilience and hustling spirit put together in this album 16 songs featuring local and international superstars. According to him, the album was inspired his mum.

This is the first entry on the list by a DJ, and it is no other than DJ Neptune’s “Greatness” album. The album features music superstars from different genres of African music dishing out 15 groovy and heart-warming songs. This is the Disc Jockey’s first album and it has since its release been a threat to albums released by the “proper musicians”, thanks to its composition. The album was released on the 25th of May, 2018.

Obviously enough, this is our 2nd entry by a DJ on this list. DJ Spinall’s “Iyanu” album got released on the 26th of October featuring music heavy-weights such as Davido, Wizkid, Burna Boy, Tekno and a host of others. DJ Spinall feeds us with “serious jams” on the album. The likes of “Your Dj,” “Baby Girl,” “Serious,” etc. have shown promises of taking over airplays in the coming weeks. This is DJ Spinall’s 4th album after previous releases of “My Story,” Ten,” and “Dreams,” in 2015, 2016 and 2017 respectively.

L.A.X until the 26th of October, 2018 never had an album to his name after serving us with hit songs in the previous years to this one. He names this debut album “Rasaking” and it’s a 15-track album which features both the male and female music giants in the industry. This is not a bad debut for the former Starboy Worldwide signee as the songs are quite impressive.

Although these are not the only albums that will be dropped this year as quite a number are still forthcoming. The likes of Mayorkun, Mr Eazi, CDQ, Kizz Daniel and others have promised to drop albums before the year runs out but until then, let’s stay woke and continue to vibe to the ones already released.

So guys, of the list of albums highlighted above; you can choose your best of 2018 so far and leave your comments in the comment section below.