DAGRIN: 5 Years On… And The Soldier Still Lives! 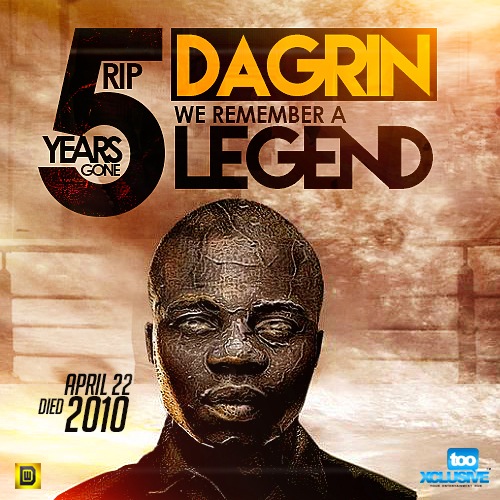 So I was on my usual social media reconnaissance today when I stumbled on a couple of tweets. The highlight is that today marks Dagrin’s 5th year memorial and as is the fashion of Nigerian Twitter, everyone is feeling behooved to baring their thoughts as to the life of a legend cut short at just 22. Apparently some folks think that if he were to be alive now, he wouldn’t have been much of the force that he is celebrated to be in-death.

Before I shoot myself in the foot, let me be very clear right here and now. As at 2010, I wasn’t a fan at all of Nigerian music… so no, I didn’t know first hand who Dagrin was or what any of his records sounded like. But since my craft tailored towards the entertainment sect, it became necessary for me to apprise myself of the goings-on in the industry. And so when I started to pay attention, I heard of Dagrin. I learned about Dagrin. I listened to Dagrin. And in blessed memory, I loved Dagrin. I found that he wasn’t just a regular singer/rapper, he was an artistic soul. Like MI was.

Whether life or death, you can’t take away some things like the human nature and then the beauty or darkness of one’s heart/soul. Dagrin is no different. One can only fathom deeply the extent to which a life was lived, when in death. Therein lies the allures of living (or having lived).
The way people immortalize you.
How people eulogize you.
So is it surprising that his allegiances are much stronger than when he lived?
No.
It’d be a wonder even, if it wasn’t so.

Dagrin did this. He made it so. He carried on with life in an exemplary manner and churned out records that spoke directly to mankind. So good that even in death, he is still an inspiration to many who have made it and more who are aspiring keenly to make it. Dagrin wasn’t just a voice, he was a mouth piece of a million other voices who were desperately crying out to be heard. Although the world has tilted too differently from whence he left it but it doesn’t eliminate the certainty that he’d have been the 360° soldier he had gradually morphed into. I’m sure artistes don’t just lace his name on their lyrics because it makes good for perfect rhymes or would be a selling factor to listeners, maybe. But I like to believe it’s because they’ve been able to tap into a telepathic connection that transcends mere waxing of records. They can finally see his heart, they feel it, they experience it, they understand his dream and they want to relish opportunities in replicating same… to be in the likeness of Dagrin!

Omini-knowest (thank you Waje!) doesn’t include one of our characteristics as humans, thus there’s no telling what would have become the life of Dagrin were he to have lived past the cold fate that took him. Regardless, it shouldn’t stop us from appreciating his gift of a life sacrifice. I could begin a count of the things that now be since the event of his been but what’s most worthy to note is the fact that he lives on… not just in our hearts, he lives a cryptic nature of this life that isn’t ours to wonder why but to do or die.