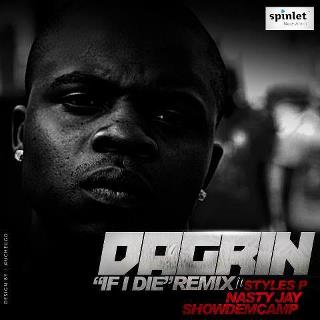 “If I die,” Da Grin’s last song released before his passing was remixed with verses added by Show Dem Camp, Styles P, and Nasty J. The track was produced by one of hip-hop’s most popular producers, Frenzy. “Frenzy was a natural choice for producing this song,” says Tunde Peters of Spinlet “he worked with Da Grin in the past and does projects for the love of the music and has such a high respect for Da Grin, the music he created, and his real ability to rhyme.”

Show Dem Camp, Styles P, and Nasty J are all at the top of their game as rising stars with hit singles and new projects in the works. “Da Grin lives on through artists like these. This is why we wanted to showcase artists undoubtedly inspired by his work and on their own paths to stardom,” says Tolu Williams of Spinlet.

“We are thankful to Da Grin’s family for being so supportive of this project and allowing us access to his personal rhyme book. This gives us an opportunity to showcase his unreleased lyrics, while also adding verses to some of his existing tracks,” say Tolu. The full-length Invincible Bulletproof album will be available exclusively on Spinlet in the coming weeks.

Spinlet is also releasing a video to accompany “If I Die” using footage shot in the style Da Grin would have desired on location in Lagos, Nigeria and Brooklyn, New York. The video will be premiered on May 9th at Industry Nite with a line-up of artists featured on Invincible Bulletproof.

Listen to the Snippet  Below

Get or listen to the Full Track on the Spinlet Application available now to your smart phone in Nigeria.