MI Abaga has threatened to slap his arch-rival Vector, after the “King King” rapper released another diss track for him in the space of just one week.

Yesterday, Vector dropped another beef track for MI which he titles, “Tetracycling.” Since the track dropped, music fans have dashed to MI’s page to urge him to give Vector a response. On seeing the influx of fans’ request in his DM, MI then responded, revealing he would slap Vector for dropping such a wack diss track for him. MI also revealed the latest diss track Vector dropped has made him feel like it would be a waste of his time if he decides to respond because he didn’t do well at all.

He wrote; “My dear friend @loosekaynon always told me @VectorThaViper can’t rap and I always said na.. bro is a great. Dear @VectorThaViper if this is it you better think again.. I will slap your face 180 degrees my G.. Also.. please go stream Tetracycling.” 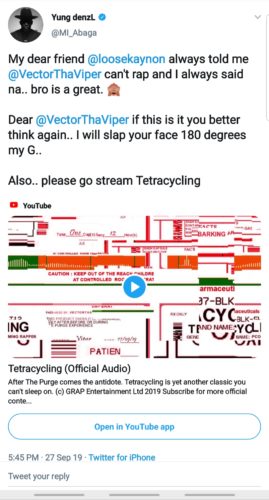 Would It Have Been A Greater Thing If Davido Was An Igbo Man? Phyno’s “Ride For You” Review

Sensational rappers, Olamide, and MI Abaga have commended Runtown, Falz, Tiwa Savage, and other celebrities who have protested against police...

Would It Have Been A Greater Thing If Davido Was An Igbo Man? Phyno's "Ride For You" Review