“Mr P Slept With My Wife & Made My Marriage Crash, I Will Revenge” – Diamond Plantnumz Accuses Former Psquare Member 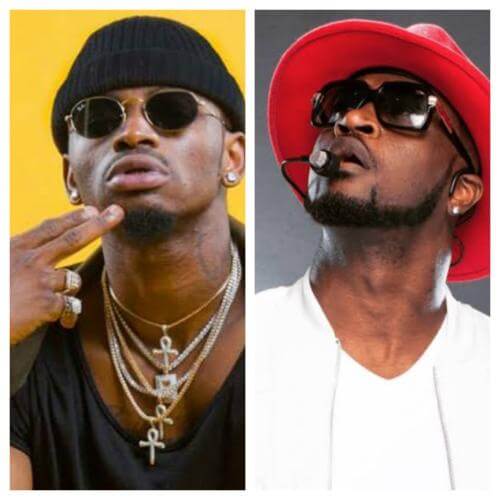 The Nigerian music industry in 2019 continues to be notorious for artistes controversies, and another one which could be the father of all music controversies that have happened in 2019 could probably be hitting the industry sooner than expected.

Tanzanian singer; Diamond Plantnumz has accused former P-Square Co-member, Peter Okoye popularly known as Mr P of sleeping with his wife, Zaria. The singer revealed in an interview with his radio station, Wasafi FM that Mr P through that act, caused his marriage with Zaria to crash.

However, after making such bold revelation, Diamond’s Ex-wife has taken to social media to debunk the news, calling her ex-husband a pathological liar who once denied his own child.

She said; “I was about to sleep and people started sending me these voice notes about how Nasibo (Diamond Plantnumz) went to his radio tarnishing me, how i had a relationship with P-square, my personal trainer and all those things. And i’m just here thinking if you guys are gonna believe any words that come from a man like him, the same man who denied his own blood.

“If you all are gonna believe anything he say, then you all are just stupid just like him.”

Mr P is married to Lola Okoye who has bore two kids Cameron & Aliona for him. He is however yet to give a response to the accusation by Diamond, but we hope he does that quickly so this wouldn’t facilitate the end of his marriage.

“”Mr P Slept With My Wife & Made My Marriage Crash, I Will Revenge” – Diamond Plantnumz Accuses Former Psquare Member”, 5 out of 5 based on 1 ratings.